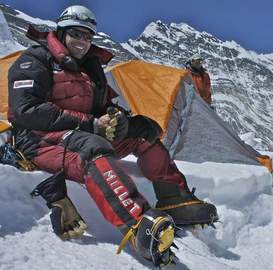 Life certainly has its peaks and valleys, and John Golden has seen the extremes of both.

Five years ago, the 43-year-old St. Charles man and former health insurance executive was in a valley – a grim diagnosis from his doctor that because of a football knee injury, he would never again climb stairs.

This past May, Golden reached the ultimate of peaks – the uppermost slopes of Mt. Everest.

After 23 knee operations and an experimental surgery, Golden was determined to rehab so he could: play with his kids, Johnny and Isabella, now 7 and 8; lose weight; and do something active.

He accomplished the first two and told his doctor he wanted to climb a mountain, since running was not allowed.

“It was an amazing moment to get to the top of that mountain after (the doctor) told me to go buy a ranch house because ‘you can’t do stairs,'” he recalled.

At 8 p.m. Sunday, the Discovery Channel will chronicle Golden’s quest to get to the world’s highest point in “Impossible Dream,” part of the third season of “Everest: Beyond the Limit.”

Golden and two others made it to within about 1,000 feet of the peak before a blizzard forced them back.

“I wouldn’t trade it for anything. Everybody would like to get to the top. I saw the top. I was right there,” he said Thursday. “No regrets. I gave it everything I got. I was in shape. Mother Nature didn’t cooperate. Up there is the most dangerous place in the world – without the weather.”

Golden’s journey began on a football field for the Northern Illinois University Huskies where he shattered his right knee. Over the years, his left knee began to deteriorate because he was overcompensating for the right one.

After many surgeries and constant pain, Golden was told by a doctor he would eventually need an artificial left knee and he should buy a ranch home without stairs.

After Ranier, Golden wanted to do more to show the surgery – he calls it the “gift of opportunity” – worked.

So he talked with his guide, John Shea of Boston, about climbing Everest. To prepare, Shea took Golden on 14 climbs to hone his skills.

He was gone a lot of weekends, but turned training into a family event – buying a custom-made bike with four seats so the whole family could ride, and convincing his wife, Marianne, to come with him to Everest and that his goal wasn’t a midlife crisis. Her trip was also part of a regiment to exercise more and reduce her cholesterol.

Golden also formed a foundation to raise money for orthopedic research. He said he has raised more than $170,000 – $1 for every foot he has climbed – through personal donations and pledges to liveactivenow.org.

Word of Golden’s story spread through climbing circles and eventually he hooked up with Discovery Channel.

Golden hopes he can inspire viewers and show them to aim high. “Set your mind to it. You can do it and don’t let others tell you (that) you can’t,” he said. “Despite your position in life, you really can achieve things you didn’t think we’re possible.”