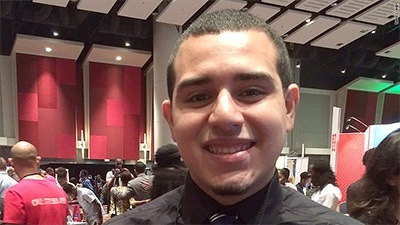 Jesus Larios pushed himself out of his comfort zone and into a job as a ball boy for the Chicago Bulls. His parents immigrated from Mexico — his dad works at an auto parts store and his mom doesn’t have a job. One older brother never finished high school and is employed in a factory, while his other brother works sporadically in construction and other jobs.

Larios admits that he did the bare minimum when he was at Kennedy High School, where 84% of the students are low-income and only two-thirds graduate in four years.

Deep down, though, he knew he could do better. So in his junior year, he decided to turn his passion for sports into a career. He looked up potential fields and set his sights on athletic training, where he could provide emergency care and rehabilitation to athletes.

The Garfield Ridge resident, now 20, is on his way to making his dream a reality. He completed a stint as a team assistant for the Chicago Bulls last season and aims to graduate Malcolm X College next year with an associate in science degree. From there, he plans to study kinesiology (human movement) at the University of Illinois.